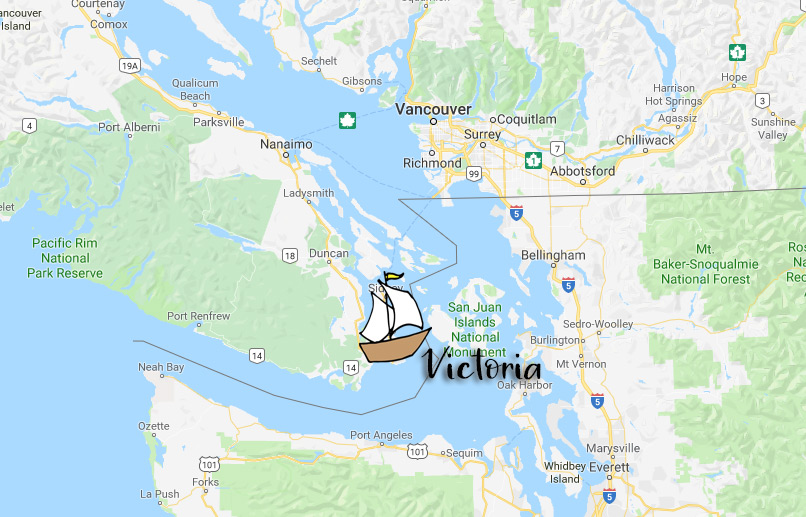 Somehow we have traveled to so many far off locations and yet we’ve never visited Canada, our quiet, unassuming, next-door neighbor. When we decided we wanted to take a vacation this year (as if we wouldn’t), we tried to think of somewhere new, but also a location where the airfare wouldn’t be astronomical. Enter Vancouver. It’s a 3 hour flight from Southern California and even cheaper than flying to many of our own States. It was settled. Canada here we come! But I will admit, for such a proximally close country, I know almost nothing about it. The chart below sums up my Canadian knowledge: 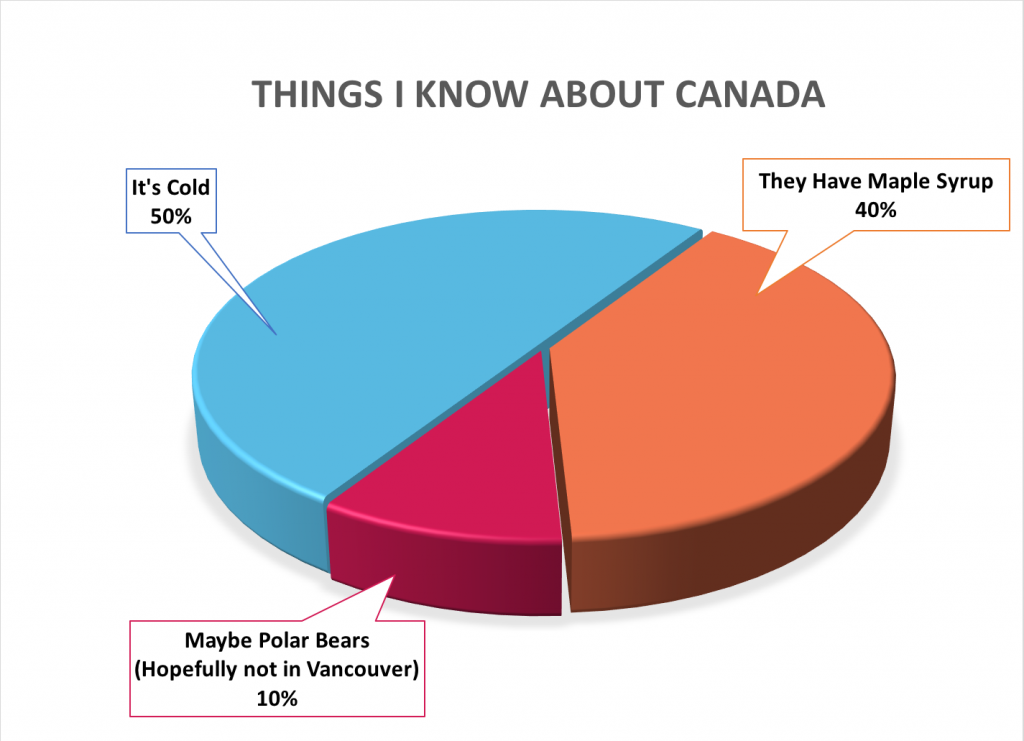 So it seems I have a lot to learn about Canada.

We packed up our family of four into 2 carry on bags and 1 backpack, grabbed my parents, and headed off to the airport.

I dressed the girls in bright yellow so that we could see them if they darted off into a crowd.

As we sat on the airplane waiting for takeoff Lizzy kept yelling, “Buckle up everyone! We’re ready for blast off!!” Immediately Christopher and I broke into a chorus of “shhhhhs” and the people around us began to chuckle. Shortly before “blast off” Katie fell asleep in my arms and left me immobile. I watched an entire movie without headphones, but I still preferred that to the risk of waking my sleeping toddler.

As we flew in over Vancouver, I kept noticing large groups of logs floating in the river. Some Google research taught me that the logs were being transported down the Fraser River from the forests, where they were cut, to the mills, where they will be prepared for sale. The logs are formed into a raft and then pulled by tugboat down the river. This is, of course, an old way of transporting timber, but if it ain’t broke, don’t fix it!

We finally made it to our hotel and walked next door for dinner. The hostess addressed our party quickly, but chatted with us slowly. She asked if she could bring us a high chair, a booster, or one of each. When we asked our server about a kid’s menu, she said she could recite it for us. When she finished, she asked if she needed to recite it again. Everything she said was clear, calm, and kind. In fact, each person working in the restaurant was the epitome of polite. They were so polite that my jaded Los Angeles mind couldn’t quite get used to it. I kept squinting at our server and thinking, “hmmm. Why is she so nice? What does she want from us? How much does this meal cost, exactly?” But I think this may actually just be the standard level of politeness in Canada (TBD).

We wanted to begin our Canadian visit with a look around Victoria on Vancouver Island.

Victoria is known for its scenic beauty and its history as one of the oldest cities in the Pacific Northwest. Victoria was actually settled in 1843 by a fur trade company, the Hudson’s Bay Company. Have you ever wondered what fur Europeans were so interested in? Beaver. They wanted beaver fur. To make (you’ll never guess) hats! By the late 17th century, beavers were almost extinct in Europe from making beaver felt hats. North America provided a new source for beavers and the fur trade boomed.

In order for our family to get out to Vancouver Island we had the option of a plane or a ferry. However, it turned out that the plane was a seaplane that took off from and landed on the water! It sounded like a very expensive way to die, so we settled on the ferry passage.

Aboard our ferry we glided past islands covered in evergreen trees. The breeze was chilly, but the sun was warm. The enormous ferry was outfitted with cafes, a gift shop, and even a little play area for kids. It was all very pleasant except that as the boat gently rolled back and forth, each adult would be alternately nauseas. We had to take turns stepping out to the bow of the boat for some necessary fresh air.

After arriving in Victoria we had just enough time to check into our hotel and walk the lovely inner harbor. At dinner my mom ordered a fancy grilled cheese sandwich that came complete with maple syrup drizzled on top. Never seen that before.

After two long days of travel, I waited until both girls were asleep and stepped gently into a nice hot shower. After showering a total of 5 minutes, Christopher came barging into the bathroom with Katie in his arms. He threw open the toilet seat and thrust Katie over it so she could barf. Apparently she had coughed herself awake in my bed, barfed once in the bed, and then Christopher rushed her to the bathroom. Thus ended all relaxation. After cleaning up Katie, I spent the next 10 minutes in the shower washing vomit out of everyone’s clothes. Because it wouldn’t be a complete family vacation without a little barfing.

For our first official excursion in Victoria we decided to visit Butchart Gardens.

In 1904, Jennie Butchart and her husband opened a limestone quarry. Once the limestone ran out, Jennie was left with a giant pit for a backyard. She envisioned a beautiful sunken garden in its place. Using a horse and cart she gradually transferred topsoil to the quarry and began Butchart Gardens. Meanwhile I mow our weeds and pretend it’s grass. These gardens are listed as the number one attraction not just in Victoria, but number one for the entire Vancouver Island.

As promised, the gardens were stunning. We wandered through amid a sea of white hair and walking canes because you know who likes gardens? Old people. Old people like gardens. But you know what young people? You should get on board with this because gardens are beautiful. So rather than detail all of the stunning sites, I’ll just show you some photos below.

A little more Victoria and then on to Vancouver! 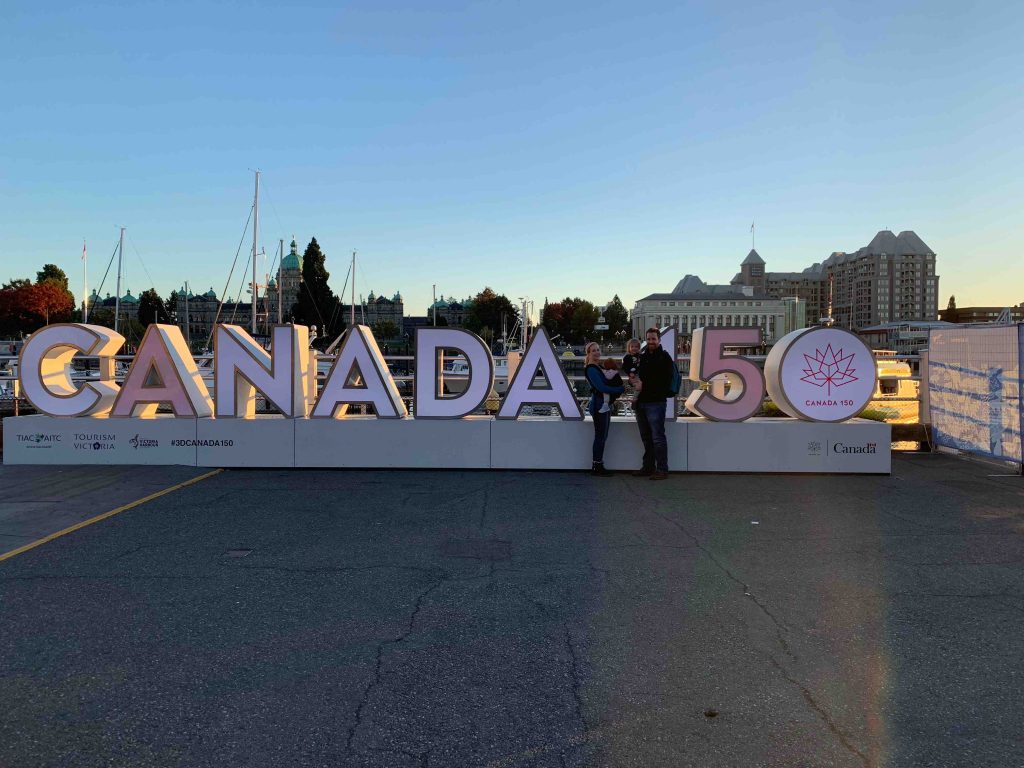