“We already have Disney passes. Why would you want to spend more money to go to the Disneyland Halloween Party? You go there every week!”

This is what my husband asked me when I declared I wanted to check out Mickey’s Not-So-Scary Halloween Party. “Technically, TECHNICALLY, it’s cheaper this year because Lizzy is 2.5 and next year we will have to buy her a ticket! And Lizzy loves Disneyland!”

Ok, if I’m being totally honest, Lizzy also loves running up and down the aisles of Costco and finding pine cones in our backyard, but I love Disneyland and that’s why Chris acquiesced and we bought tickets.

Yes, we spent $210 for two tickets to attend this party. Tickets ranged anywhere from $85-$120 depending on the day and how close it was to actual Halloween. The closer you are to the actual holiday, the more they cost. So $210 got us in one month before Halloween; Friday, September 29th, to be exact.

After another $20 in parking fees we arrived at Downtown Disney at 6:00 pm to grab dinner at The Jazz Kitchen before the party. We managed to sneak in just ahead of the crowd, but by 6:30 pm every table was taken and the place was hoppin’. Apparently everyone else had the same idea.

Once we made our way to the Disneyland entrance, we found ourselves in a massive line. There weren’t many entry stalls open and each guest had a gold paper bracelet fastened around their wrist, which took time. The bracelets ensured that we were fancy Halloween party guests as opposed to regular paying guests who were kicked out by 7:00 pm.

Most guests were dressed in costumes of some sort including the adults. Several families arrived in group themed costumes (i.e. all dressed as Frozen characters). It seemed that the adults were as excited to dress up at Disneyland as the kids.

Not us though. I spent all of my energy sewing Lizzy’s mermaid costume and I wasn’t about to sew three more mermaid tails for our family. Chris will just have to be a mermaid NEXT year. He was fine with that.

Shortly after entry, we were each handed a bag for goodies and we immediately found a Treat Trail. These trails were stationed throughout the park for guests to collect candy, chips, pretzels, and even bags of apple slices and carrots.

The trails were fairly long with about 4-6 Treat stations along the way. Treats were given to children and adults alike.

Lizzy had a fabulous time running up to each cart and yelling “tik or teeeet.” But in truth the trails were fairly boring. They were not decorated and they were in out-of-the-way places where Disneyland could direct people without blocking anything important.

Disney did, however, do a great job of funneling large numbers of people thru these lines very quickly. We only hit four Treat trails and it was enough to fill Lizzy’s bucket to the brim.

There were several more trails we didn’t walk. A guest could easily go home with multiple trick or treat bags of candy. Maybe not $210 worth, but a lot!

Treats were given to children and adults alike. 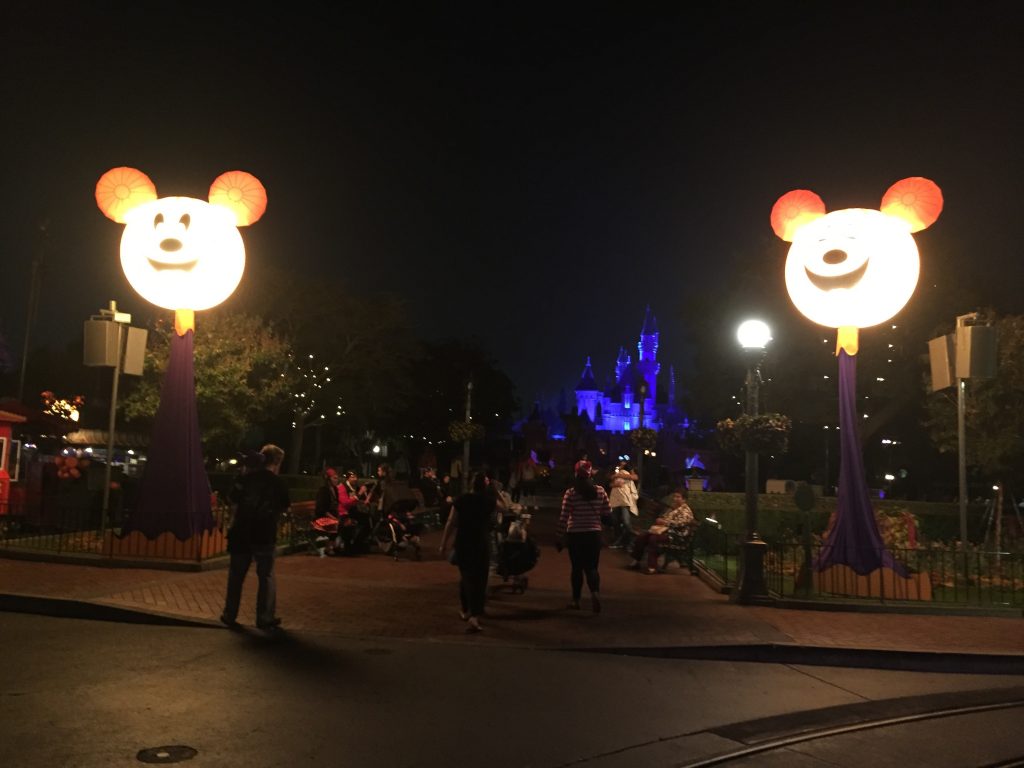 Next we found a dance party at Tomorrowland Terrace where characters appeared on the dance floor and jived with the kids.

Lizzy thought the party was ok, but she was REALLY excited about all of the other little girls dressed as mermaids. She was too shy to speak to them, but wanted to stand near them.

Then it was on to some Fantasyland rides and this is where the ticket price became much more palatable. The rides were virtually empty.

Maybe most people were checking out the other events or perhaps Disneyland didn’t oversell tickets for once.

Whatever the case, we basically walked right on to the teacups, Alice in wonderland, and Mr. Toad. My husband was ecstatic. He hates lines, crowds; all people really. He would be happy to live in a deserted forest if it wasn’t too hot and he had a TV.

So he was grinning from ear to ear as we zipped on to each ride. That coupled with the (always) pleasant California evening temps made for a lovely evening out.

The rides were virtually empty.

As we walked towards Small World the parade started. The parade was shorter than a typical Disneyland parade, but very entertaining.

My personal favorites included the Dr. Facilier float from Princess and the Frog with his bass-filled music and a Haunted Mansion float complete with the ghostly ballroom dancers doing a mix of ballroom and Thriller choreography.

The final parade float was filled with Disney’s classic movie villains. Lots of people had lined up to see the parade, but even jumping in and watching from the back, we got a good view. Once again, not having a huge crowd makes the whole Disney experience better.

After the parade, guests anxiously awaited the Halloween themed fireworks show. All except us. Fireworks make Lizzy “a wittle bit nuwvous” and we had forgotten to bring the girl’s hearing protection ear muffs.

So as most people moved to prime firework locations, we started hauling ourselves as far away from the firework show as possible.

This turned out to be more difficult than we thought since the firework show happens basically above the whole park. We darted through crowds; me pushing our beast of a stroller and Chris clutching Katie to his chest while covering her ears.

Luckily, it turned out that the secret to making fireworks tolerable to a toddler is to give her M&Ms to eat. Katie actually fell asleep in Chris white-knuckled grip!

Since we had hurried all the way over to Frontier Land, we decided to take our two tiny children on Pirates of the Caribbean – a dark boat ride with robotic pirates and a couple of drops in the dark.

You can put your eyebrows back down. Our kids were fine. Katie slept through the entire ride and Lizzy has nerves of steel.

We exited the Pirates ride and got a good look at the Disney ambiance. Disneyland had pumped mist out across the Rivers of America along with green and purple lights while eerie songs from Disney movies filled the air. Disneyland knows how to excite the senses.

Around 10:45 pm we headed back over to Fantasyland. We happened upon a character meet-and-greet going on at the Royal Theater. We stopped to admire the princesses in their beautiful ball gowns and then started to walk on.

That’s when Lizzy declared that she wanted to meet the princesses. We eyed her warily.

We had waited in line before to meet Minnie Mouse, but once Lizzy got to the front and was faced with the giant frilly rodent, she buried her head in Chris’ shoulder and wouldn’t look up. But, the line was incredibly short, so we gave in.

Speaking of photos, Disneyland had a professional photographer there to take pictures of this special (or terrifying) moment as well as an additional employee who would snap pics with your iPhone or whatever personal camera you brought.

We thought that was nice since we would never pay for the fancy professional photos. (Side note: once we got home we decided we wanted to just see what the professional photos looked like and it turned out we could download them for free! Huzzah! Apparently free photo downloads were included in our fancy-pants ticket price).

After the less-than-successful visit with Belle and Tiana, Lizzy declared she wanted to meet Snow White and Cinderella as well. What?? So we got back in line. At least this time Lizzy released her grip on Chris long enough to give them both hugs. She has a love/terror relationship with all of the characters. 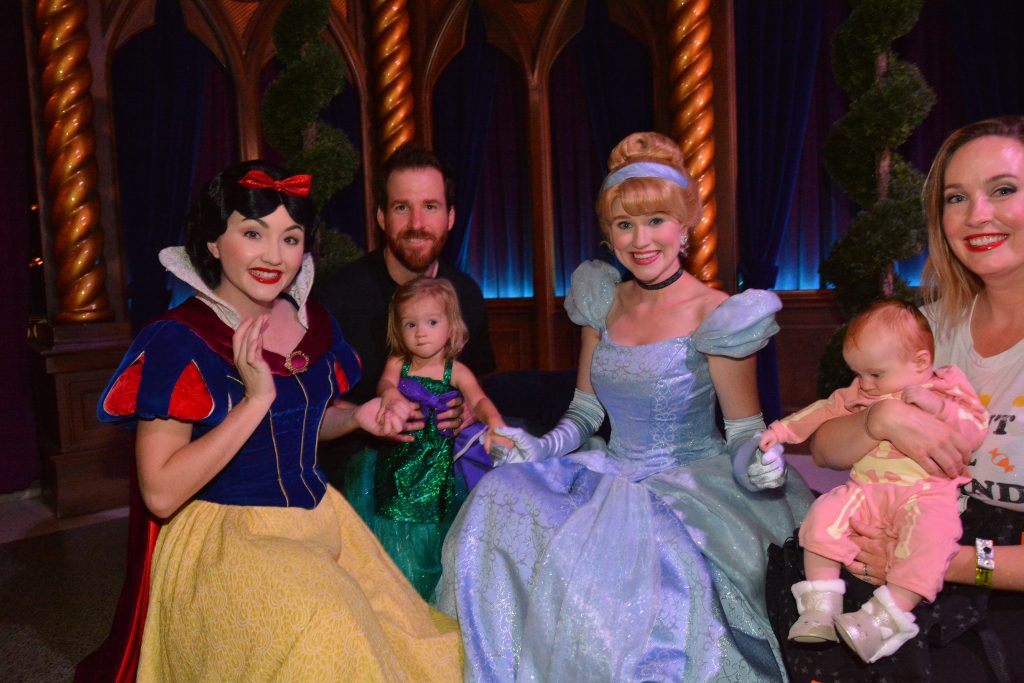 For our last ride we got in the short line for Snow White. Katie, who had been asleep and we assumed was down for the night, woke up and began fussing.

Naturally, because this was the most inconvenient place, Katie decided she was hungry. I waited until we were on the ride and then proceeded to nurse Katie as we jerked around dark corners and under gnarled trees. Fun fact: cradle cap glows under black lights!!!

As we walked out of Fantasyland I noticed a fancy Cinderella dress for little girls that was nicer than the traditional dress sold in Disney stores. Once I got a look at the price tag I could see why it was a nicer dress. It needed to be nicer. Much nicer. It cost…wait for it….$350! I scooted Lizzy right past that shop.

Move along, move along. Nothing to see here. 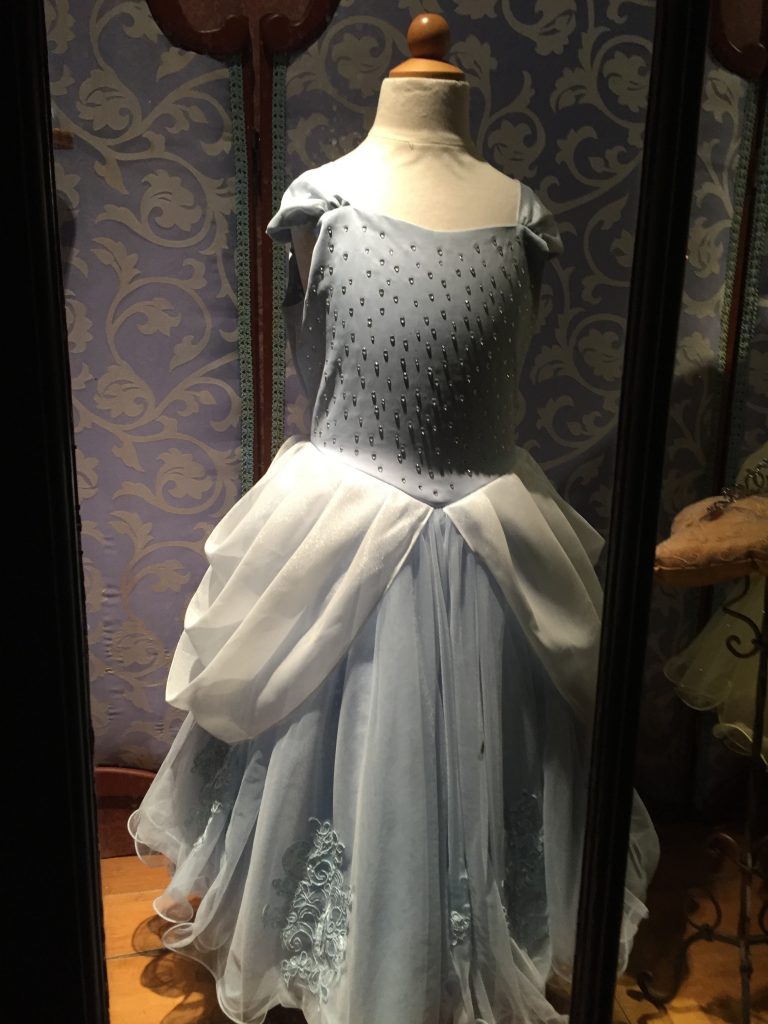 The party ended at midnight, but we started walking out at 11:30 pm. We were all partied out.

I did stop in the candy shop on Main Street to see all of the special Halloween treats. It turned out that the treats weren’t really different than the normal fare, they were just decorated in Halloween theme.

I got a traditional caramel apple to cap off the night. Lizzy and Chris dug into their candy and we all looked at the bag of carrots with dismay as we exited the park.

Was it worth it? Kind of.

It made Halloween this year seem extra special (and early since we went in September).

I think everyone should try it at least once. If you are a Disney fan, it’s exciting to see your beloved park and characters in a new spooky light.

Next year it may be me saying, “I don’t know about the cost,” while Chris protests, “but we have to go! The weather was so nice and the lines were so short!”

It made Halloween this year seem extra special.

Pin it for later 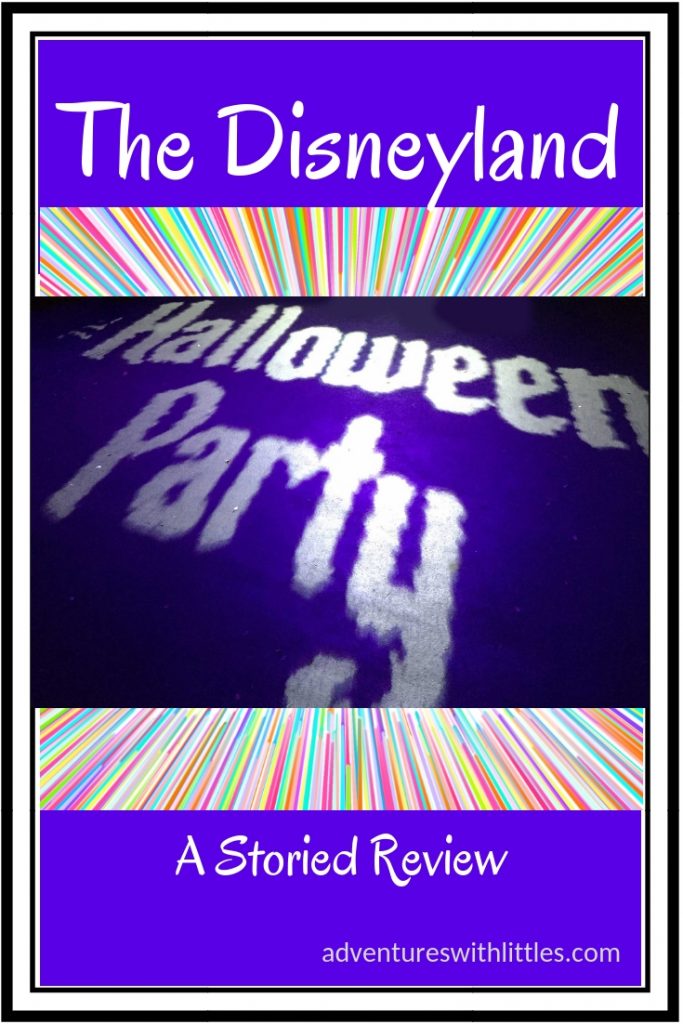