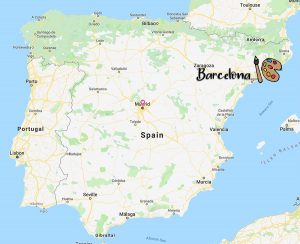 The most important thing that happened this last week – My parents have arrived!  I am so thrilled to have gained two sightseeing, child-wrangling, companions.  Gee, I hope my parents didn’t think they were going to get a vacation while they are here…

So we booked a weekend trip to Barcelona.  Friends and family had told us that Barcelona was great and we should go, so we bought train tickets and reserved a hotel.  And that was pretty much it.  No other planning.  No other research.  This is really unusual for us, but, frankly, time escaped us and it never happened.

The great thing about walking into a new city totally unprepared is that it gives you the opportunity to be blown away.  And, man, Barcelona blew us away.

When we first arrived to our hotel in the Gothic Quarter, I was tired from the trip and ready for a break. But I looked from our window across the street to a narrow cobblestone alley with some shops and I decided I needed a look.  So we wandered down that street looking into unique art shops.  Another street turned into a historic Roman wall and then the next street was quiet and residential with abundant greenery hanging from each balcony creating an overhead canopy.  Restaurants, boutiques, art studios, sex shops, pot shops, chocolatiers, and historical buildings all stood side-by-side on small cobblestone streets and in large open plazas.  Around every corner was a new surprise.

On one street a man was blowing giant bubbles for children.  The girls laughed and laughed as they chased the bubbles and they were even almost swallowed by a few of the larger ones!

As we walked we found ourselves at the foot of the Barcelona Cathedral.  I know we have been to several Cathedrals this trip, but somehow, they are always breathtaking.  Of course, these expansive structures take years to build.  In the case of the Barcelona Cathedral, it took 150 years to build (building began in 1298 and completed in 1448). This means that many builders who worked on this cathedral for their entire lives were never able to see it completed.

Next, Christopher asked if we would like to see the water, to which I replied, “the what now?”. Remember how I didn’t do any research? Well, I had no idea Barcelona had beaches!  I had seen it on a map, but I didn’t know it was coastal!  I didn’t even pack anyone a bathing suit!  Indeed, Barcelona has a three-mile golden strip of Mediterranean coastline. 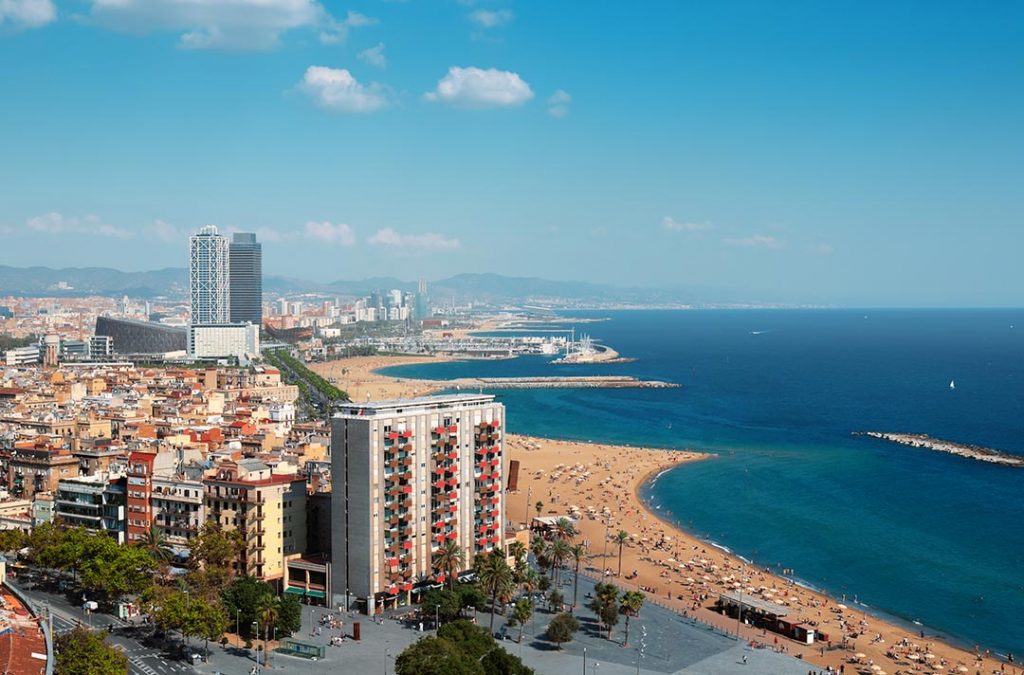 We walked to the beach at 8:00 PM and, for the first time ever, I was able to see the Mediterranean Sea. Of course we HAD to touch the water, swimsuits or not!  We walked to the edge through some slushy, coarse sand and slipped our feet into the warm gentle waves.  It was very different from the large crashing waves and cold water of our California beaches. 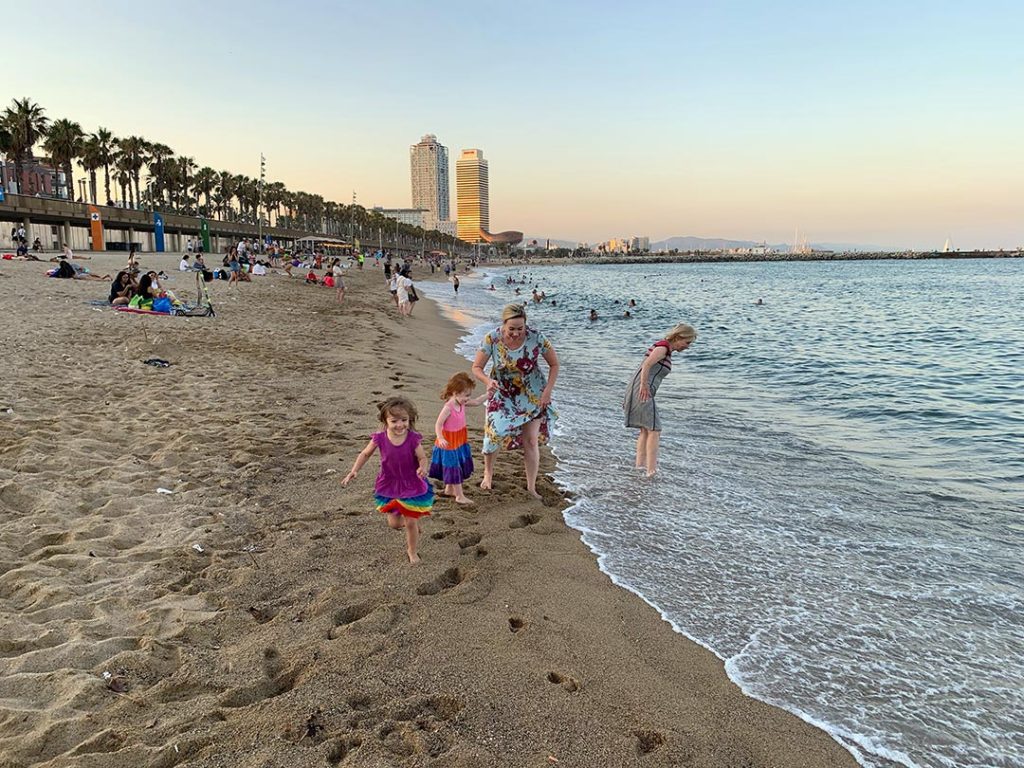 While we were busy trying to not get our clothes wet, other beachgoers weren’t wearing much at all. Thong bikinis were common and I even saw two different women bathing topless.  Chris managed to see a total of 4 topless women because he has man-vision and it’s much better at spotting nudity.

Speedo bathing suits also seemed to be popular among the older generation of men.  Unfortunately for anyone with eyes, wearing a speedo seemed to have much less to do with a fit body and much more to do with a misplaced amount of confidence.

As we walked back to our hotel that night, we passed a large gathering of people swing dancing. They were amazing and we were entranced.  As the sun sank and the heat of the day ebbed away, we walked past restaurants filled with people and delicious smells, vendors with blankets on the streets selling knock-off handbags, and tiny children like ours still out for the night. It was a city alive and joyous.

The following day we trekked over to the Basilica de la Sagrada Familia, which is considered one of the best sights in Barcelona.  The Sagrada Familia is a “modern” cathedral dedicated to the Holy Family.  I put modern in quotes because construction began in 1882, but when many of the cathedrals we have seen began in the 1200s or the 1400s, well, 1882 seems pretty new.

The Basilica was designed by a Spanish architect named Antoni Gaudi.  His concept was largely influenced by nature and, wow, he put very intentional thought into each piece of his design.  For example, the stained glass windows on the east side of the Cathedral emphasize cool tones to coincide with the cool morning light whereas the windows on the west side of the cathedral emphasize warm tones to coincide with sunset.

The large interior pillars are designed to look like trees connecting heaven and earth. 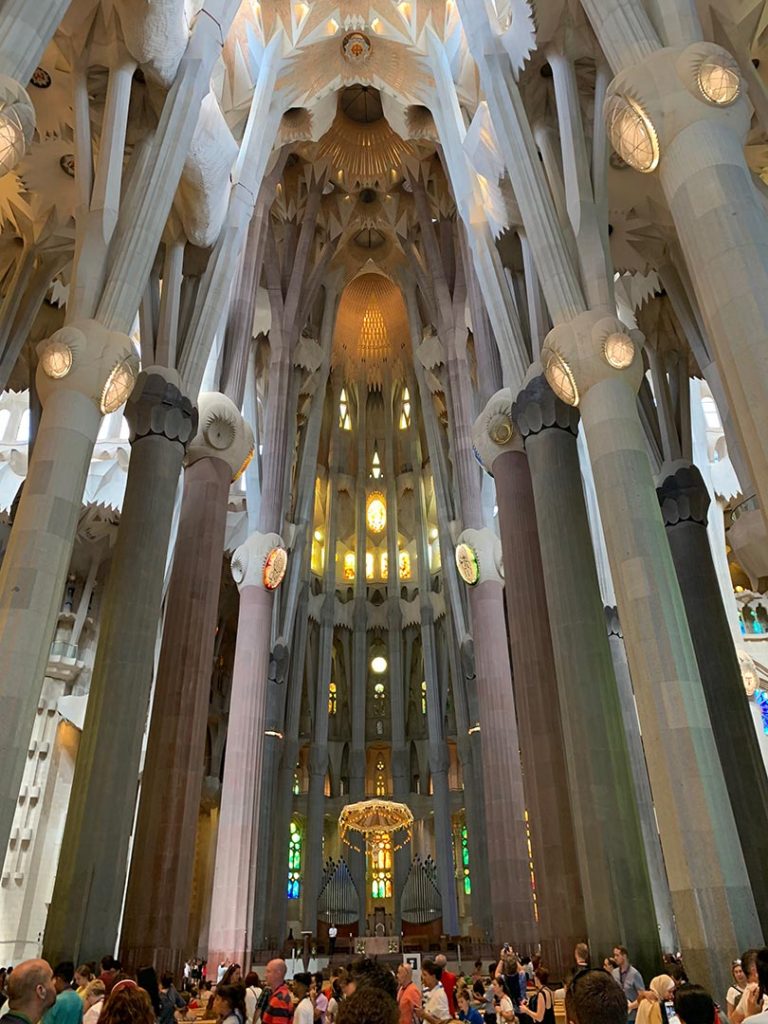 The large exterior pillars of the Passion Façade are made to look like tensed muscles and tendons symbolizing Jesus’ pain and death.

Lastly, Gaudi, a very pious man, capped his tallest central tower to 170 meters tall because the nearby mountain Montjuïc stands at 185 meters.  Gaudi believed that nothing man-made should stand taller than the work of God.  This was one of the most stunning cathedrals we have ever seen.  In true cathedral fashion, it is expected that this project will require 144 years of construction putting the completion date in 2026.

The girls were (sort of) good sports during all of our cathedral roaming, so when they begged to return to the beach, how could we say no?  Of course, we still didn’t have bathing suits for them, but that didn’t seem to be stopping any of the locals.  So, we let the girls swim the Spanish way and added two little nudists to the Barcelona beach.