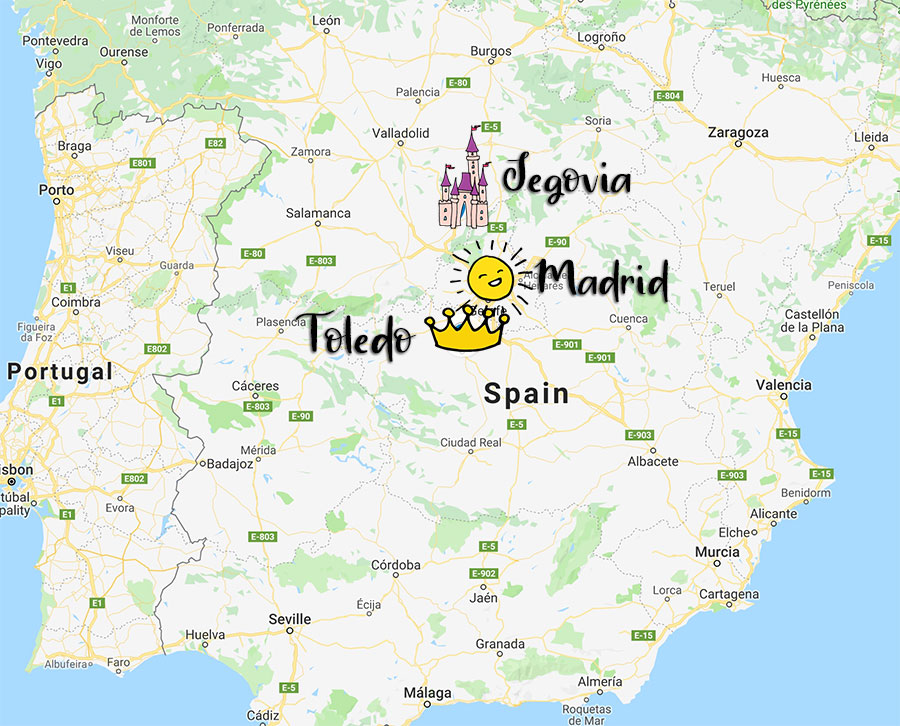 After a couple of weeks exploring exciting (hot) Madrid, we decided we needed a little change of scenery. We noticed that the neighboring town of Segovia was expected to be 10 degrees cooler this past weekend, so we loaded into the car and chased the weather.

Segovia is only an hour outside of Madrid and offers an incredible view into history.

As soon as you enter Segovia, you are blown away by the massive Roman Aqueduct rising up in front of you.  This aqueduct was constructed around 50 A.D. to supply water from the Frio River to the town of Segovia (about 10 miles away).

This feat of civil engineering was constructed with granite blocks and NO MORTAR.  Just a perfect balance of forces.  This aqueduct has been standing for around 1,900 years!  Meanwhile I can’t make a stable Lego tower.  This Aqueduct is one of the most intact Roman Aqueducts in Europe.

Next we made our way to the edge of town to the Alcázar.

If you think this castle looks familiar, you have a good eye.  And you probably watch a lot of Disney movies with your kids (I know I do).

The Spanish Alcázar is said to be Walt Disney’s inspiration for Snow White’s castle.  But, of course, there is even more impressive history here.

This castle has gone from Roman fort, to Muslim fortress, to principal residence of several Spanish monarchs.  The name Alcázar comes from the Arabic word for fortress (al-qasr).  The castle was built in its current form in the 13thand 14thcenturies, but with numerous Kings and Queens living in this castle, it has undergone several renovations (i.e. “Castle Hunters” with a royal budget).

Speaking of Kings and Queens, remember Queen Isabella of Castile and Ferdinand II of Aragon?  You learned about them in elementary school.  They were the Spanish monarchs who agreed to finance Christopher Columbus’ westward voyage that eventually resulted in the European discovery of the Americas.  Queen Isabella was crowned Queen in the town of Segovia in 1474!

The following weekend we made our way to regal Toledo. (Spain, not Ohio. Oh you got that already? Ok then).

Toledo is an ancient walled city more than 2,000 years old. What is amazing is that the city has hosted so many different kingdoms that it is brimming with monuments from various times and religions.  The entire city is a window into history.

First came the Romans, then the Visigoths, then the Muslims, and then the Christians.  In Toledo you can see historic mosques standing across from historic cathedrals.

Toledo was historically a melting pot of religions and the Jews, Christians, and Muslims coexisted reasonably well until the fall of Granada, the last Muslim ruled city in Spain, in 1492. At that point the Jews and Muslims of Toledo were forced to convert to Christianity or flee.

We were fortunate to have two of Chris’ coworkers join us for our Toledo excursion. For one thing, they helped push the stroller up and down hilly cobblestone streets. We are about to walk the wheels right off of our cheap double stroller.

“One product Toledo has been renowned for since the 16th century is Toledo steel. Famous for the high quality alloy that is remarkably durable, the steel manages to remain flexible enough to be made into swords. For this reason, Toledo became a center of traditional sword-making and Toledo swords became the standard weaponry among the Romans” (“10 Cool Things”).

Many Toledo shops featured swords for kids and adults. I had just finished scooting Lizzy away from some wooden swords she was eyeing when I caught Christopher drooling over the man-swords. And wouldn’t you know it – many shops offered a sword from each of the Game of Thrones houses. House Stark anyone? It’s like real life Valyrian Steel!  No, we did not buy one.  I’m not trying to take 2 children AND a sword through customs.

Now, before you think that this last week has been filled with nothing but beautiful sightseeing, let me tell you, we have still had our share of misadventures.

Like the night we went out for a 4:00 pm snack.  We studied the menu for anything the girls would eat and settled on an egg dish called, “huevos rotos con gulas.”  We stuck that phrase into Google Translate and it came out, “broken eggs with gluttony.”

“Gluttony?”  What could that mean?  The waiter was coming to our table so I took a guess.  I said to Chris, “gluttony sounds like something delicious, so I’m thinking eggs with cream or butter?”

I ordered and the waiter raised an eyebrow.  “Con gulas?” he asked.  “Si,” I replied, full of confidence.

Then this is what arrived at our table.

The girls wouldn’t even sniff it.  Even Chris and I stared at it with hesitation.  We kept Googling and couldn’t pull up anything!  But obviously this wasn’t the scrambled eggs with cream that I had envisioned.  Chris and I each took a small bite of these very small, salty, noodles???  And that’s when Google finally did it’s job and told us that those were, in fact, baby eels.

So then Chris and I had to take a moment to hold back our vomit (because we are easily two of the most ridiculously picky people on the planet) and scoot all of our other food away lest it be contaminated by the baby eels.  We pushed the eels around on the plate to make it look like maybe we ate some and then no one touched it for the rest of the night.  But even now, when I close my eyes, I can imagine those salty eels and feel my stomach take a turn.

Also this week, Katie decided to color on the apartment couch and brown water began leaking through the roof of our apartment thanks to some upstairs construction.  We have since moved apartments.