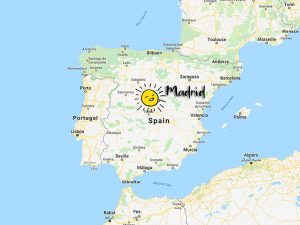 Hola Mis Amigos!  Our little family of 4 is off adventuring again; this time in Madrid, Spain!  We expect to be here for a total of 7 weeks while Christopher goes to work and the girls and I play.  This is our first time in Spain and it is sure to be educational.

We arrived Saturday to a warm evening and a harrowing drive through the narrow streets of Madrid.  We found our small Spanish apartment and looked around at its many quirks.  First, we noticed the square toilet.  Next, we discovered the combo washer/dryer in the kitchen.  It holds about 7 items of clothing and has instructions in hieroglyphics. And finally, we observed the kitchen that is so small either me or my butt can fit in it, but not both of us.

As usual, our first order of business was to go out shopping for a few apartment necessities.  Now, since planning this trip, I had been concerned about the language barrier.  Sure, I took Spanish in high school and I took it so “seriously” that I completely failed the Spanish entrance exam in college.  Cue me taking Spanish again in college, and starting from scratch.  So yes, I have taken Spanish twice (also trigonometry) and yes, at one time I was decent in Spanish (due to all of the redundant classes), but I graduated college many many years ago.  There were film cameras involved in my graduation. So I wasn’t entirely optimistic about my Spanish skills.  It turns out, I had no reason to be concerned.  Everyone in the Madrid airport spoke excellent English.

So we go out to the grocery store and I begin to look for diapers, only I couldn’t find them. “Perdóname, hablas ingles?” *Store attendant shakes head*  And so it went that everyone replied that they spoke little or no English.  Uh oh. The airport lied to me!  My assumption was wrong and yes I WILL need to make a sincere attempt at this language!  Why didn’t I use my Duolingo App to practice at home???  Oh right.  Because I have kids.

So I located a female store clerk that looked friendly and decided to ask her for diapers, only, I didn’t know the Spanish word for diapers.  I began emphatically pointing to my crotch and saying “baby” and “diapers.” She looked at me with an equal mixture of confusion and humor.  Ok, she didn’t understand “diaper.”  I tried “nappies.”  Nope, she didn’t get it.  Then I said, “couches” (French) and she finally sighs with relief and says, “Oh! Dodoties” and she pointed me in the right direction.  After she walked away Chris asked me, “why were you pointing to your crotch and asking that lady about Doritos?”  Ok, so we found diapers, only 20 more items to go.  Sigh.

Despite my Spanish-speaking troubles, Spanish is an excellent language to learn with an interesting history.

Around 200 BC, Roman armies invaded the Iberian Peninsula (the area we now know as Spain and Portugal) and brought with them Latin.  75% of Spanish words have Latin roots and much of Spanish grammar and syntax is derived from Latin.  Then, between the years 711 and 1492, Moorish invaders from Northern Africa conquered parts of Spain and influenced Spanish further with Arabic words.

The Spanish we get to hear in Madrid is called Castilian Spanish and the regions that speak Castilian Spanish are often proud of their accent because it is regarded as a very proper form of Spanish.  Sort of like saying someone speaks Oxford English.

Being from California and mostly hearing Spanish from Latin Americans, the Castilian Spanish sounds like it’s spoken with a lisp.  For example, at home I hear “Gra-C-ias” for “thank you,” but here it sounds like “Gra-THI-as.”  And I am certainly not the only one who hears it this way.  There is even a legend about where this lisp comes from.

Supposedly King Ferdinand of Spain had a lisp and his countrymen imitated him as a form of respect, thus the Spanish lisp was born.  Unfortunately, this entertaining story has been debunked by historians and linguistics.  No, the “lisp,” like many linguistic differences, is just the result of languages evolving differently over many years apart (Spain vs Latin America).

Goodness knows we don’t sound like the British.  Have you ever heard them pronounce aluminum??  Or tried to understand a Scottish person say…well…anything?!  Of course, I could say the same thing about the accents of some of my family in Tennessee (I’m looking at you Zahnnie).

Despite my Spanish speaking struggles, I’m vastly outperforming the rest of my family.  The first time Chris asked someone if they spoke English he said, “Parlez-vous Inglesi?” which is a combination of both French and Italian, but no Spanish.  And every time I prompt Lizzy to say “thank you”, she replies, “Merci.” So we’ve got a lot to learn while we are here.  Lizzy also likes to point out, “Mommy, when we get tired of trying Spanish, we can just talk human.”

If I may digress…

Now I know I write laughingly about our experiences, but the truth is, the first week in a new country can be really scary.  Chris leaves for work and I am left alone with two young children in a strange apartment.

Outside of the apartment I don’t know where anything is, how to get anywhere, or a single other person. And, in this case, I don’t speak the language well.  It is easy to become overwhelmed.

But, on Wednesday, I took a leap and joined a Mommy and Me Yoga class in the park.  To my surprise and delight, the class was even in English! Sitting there in the park and talking with other moms finally made me feel like I could handle this.  If I can just integrate a little into society, I won’t feel so overwhelmed and alone.

So, I guess what I am trying to say is, when you’re the outsider, the people that reach out to you are such a blessing.  I know I have had outsiders in my life in the past and I didn’t make a big effort to connect with them because, well, I was busy with my own life.  But feeling alone really makes you cherish those who take the time to connect with you.

“What kind of Spanish is spoken in Madrid?”. Madrid University. www.madrid-university.es/Madrid-Spanish-spoken.html#null. Accessed July 11. 2019.