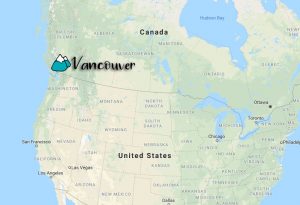 I’m a big fan of sea otters.  How can you not love the playful “kittens” of the sea?  And Lizzy is currently enamored with the children’s show, Octonauts.  All the sea creature love meant a trip to the Vancouver Aquarium was in order!

We hopped on a bus that drove us just outside the bustling city and dropped us off in Stanley Park, a huge, beautiful oasis of Pacific Northwestern nature.  The contrast between the city and the park was significant.  The air already felt fresher.

Speaking of nature, most Canadians we pass on the street look as though they are on their way out of town for a camping trip.  The style of dress here is very casual and many Vancouverites can be seen sporting hiking boots and some sort of outdoorsman style jacket.  The brands North Face, Patagonia, and Columbia are abundant.

The aquarium was huge with tons of informative displays and, yes, we got to see my otters.  If you’re in Vancouver, add the aquarium to your list.

There was one unique aspect of the Vancouver Aquarium.  Everywhere we looked, we were met with a new display alerting us to the damaging effects of plastics in the ocean.  The exhibits were everywhere!  The aquarium was really trying to educate the public about this growing environmental concern. 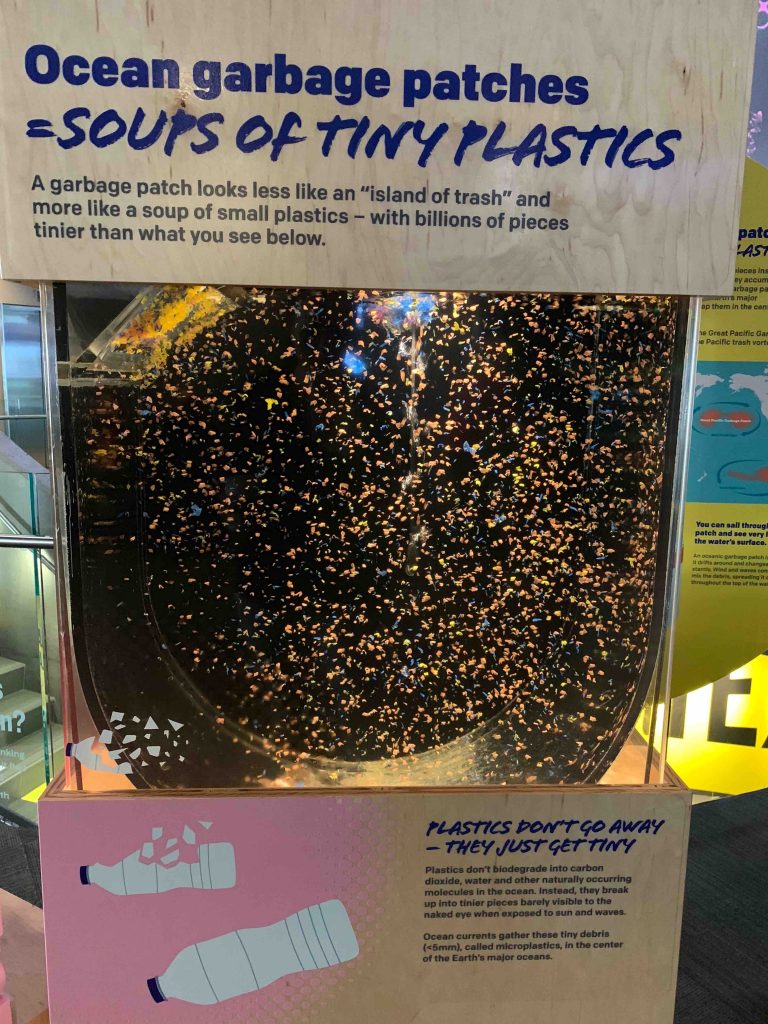 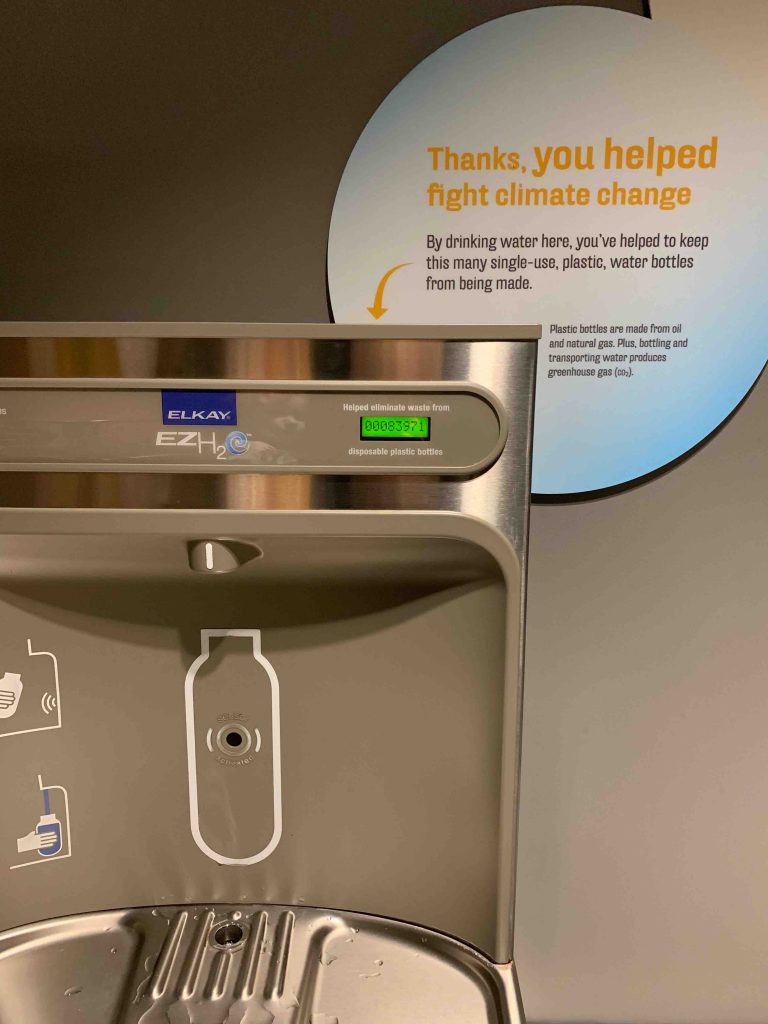 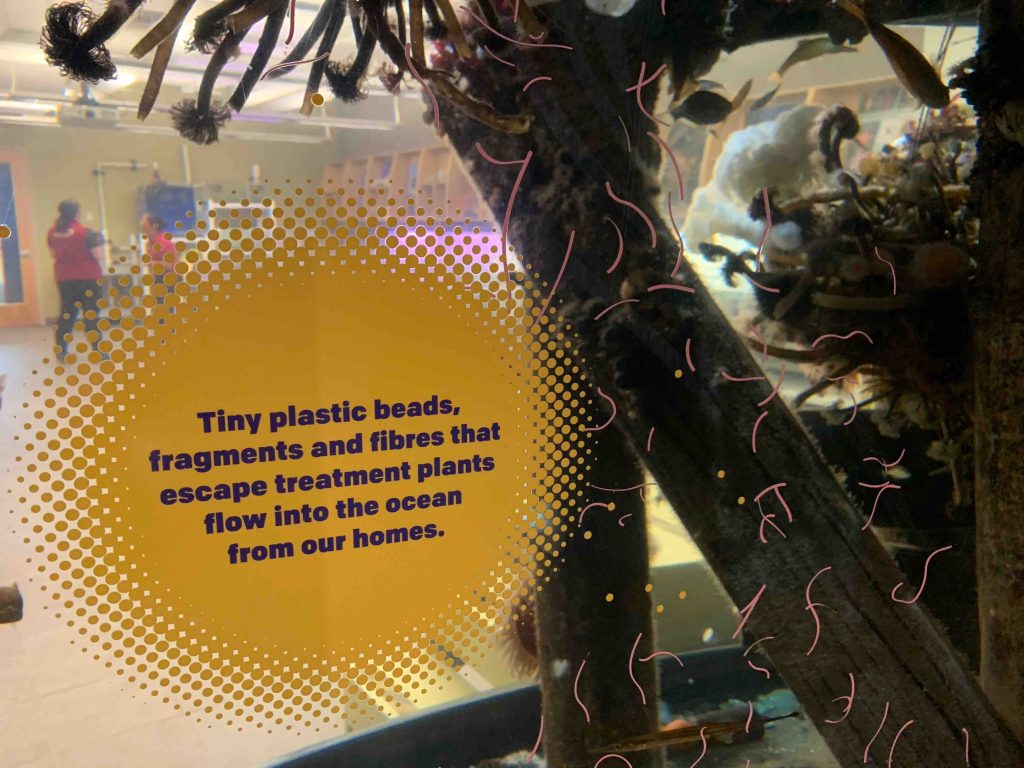 In another environmental effort, every trash receptacle in Vancouver is split into multiple bins.  We typically see recycling (bottles/cans), recycling (mixed paper), organic/compost, and garbage/landfill.  Many of the waste receptacles include pictures of what belongs in each can, and, frankly, I’m learning a lot!

Some Google research taught me that Vancouver has had a composting program in place since 2015.  All individuals and businesses must separate out their organic waste.  If too many food scraps are seen in your landfill trash, the haulers will not accept it.

This practice is important because, “when food scraps are put in landfills, they produce methane, a powerful greenhouse gas 20 times more potent than carbon dioxide.  67% of all the methane generated within the Metro Vancouver region comes from landfills.  But when composted properly, food scraps return nutrients to the soil to improve soil health and reduce the need for chemical fertilizers.  They can also go into a different kind of facility that captures the methane and turns it into energy, or processes it into biofuel that run vehicles – even garbage trucks.” (Questions and Answers for Residents) 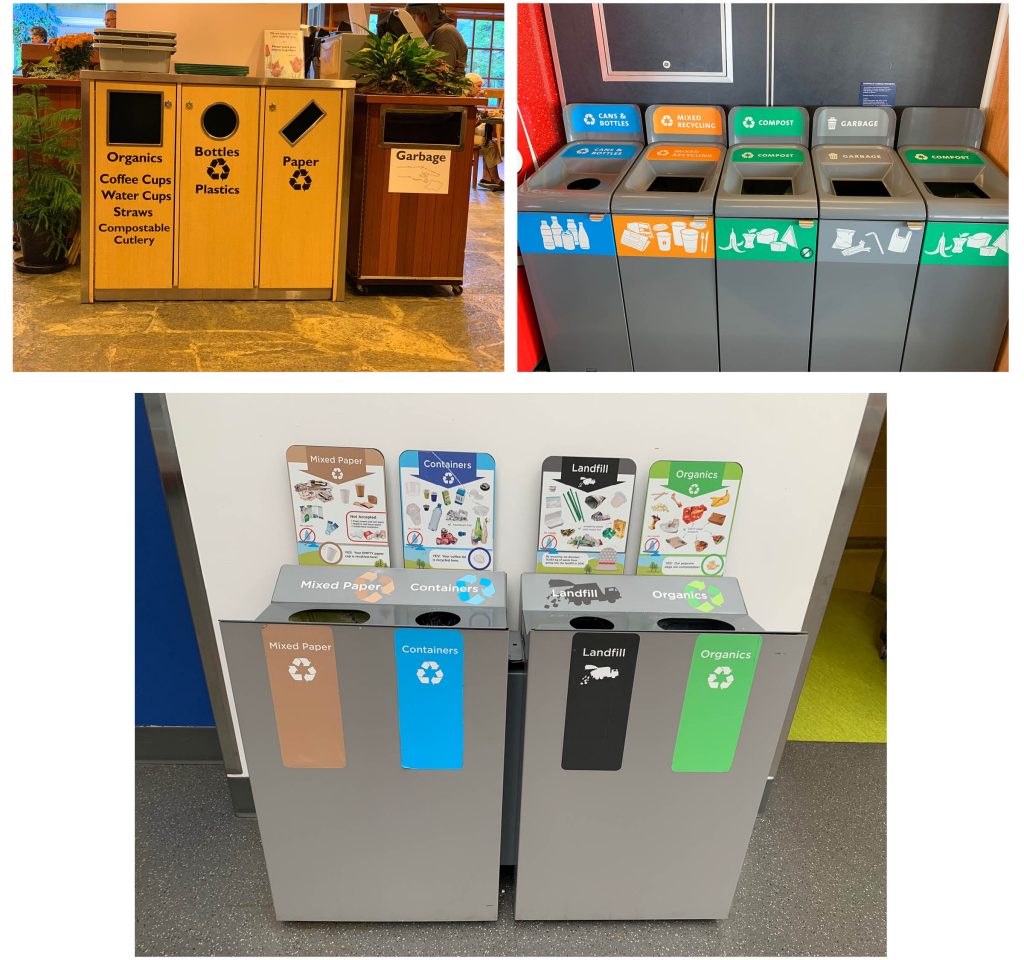 On Wednesday we hit another Vancouver delight called Granville Island.  It started as an industrial manufacturing district, but was defunct by the 1960s.   However, in the 1970s, artists and performers found abandoned sheds at Granville to practice their crafts.  Granville Island was reborn.  Now it is a hub for farmers markets, unique food vendors, artists, and theater.  One main attraction is that only independent, one-of-a-kind businesses operate here. 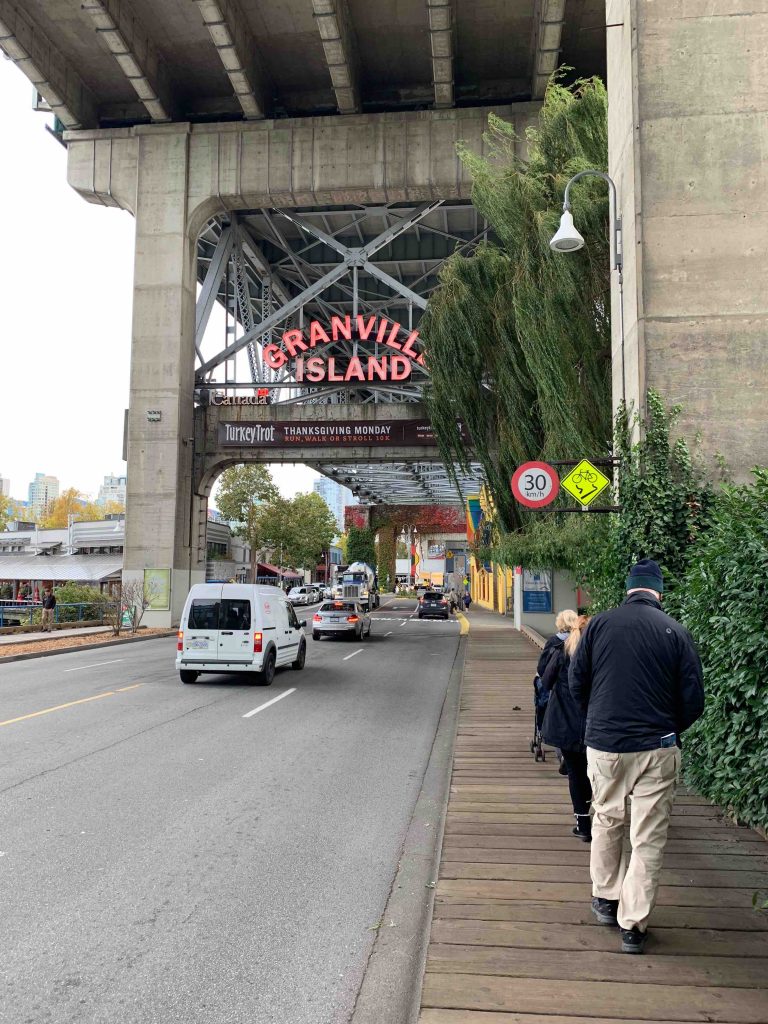 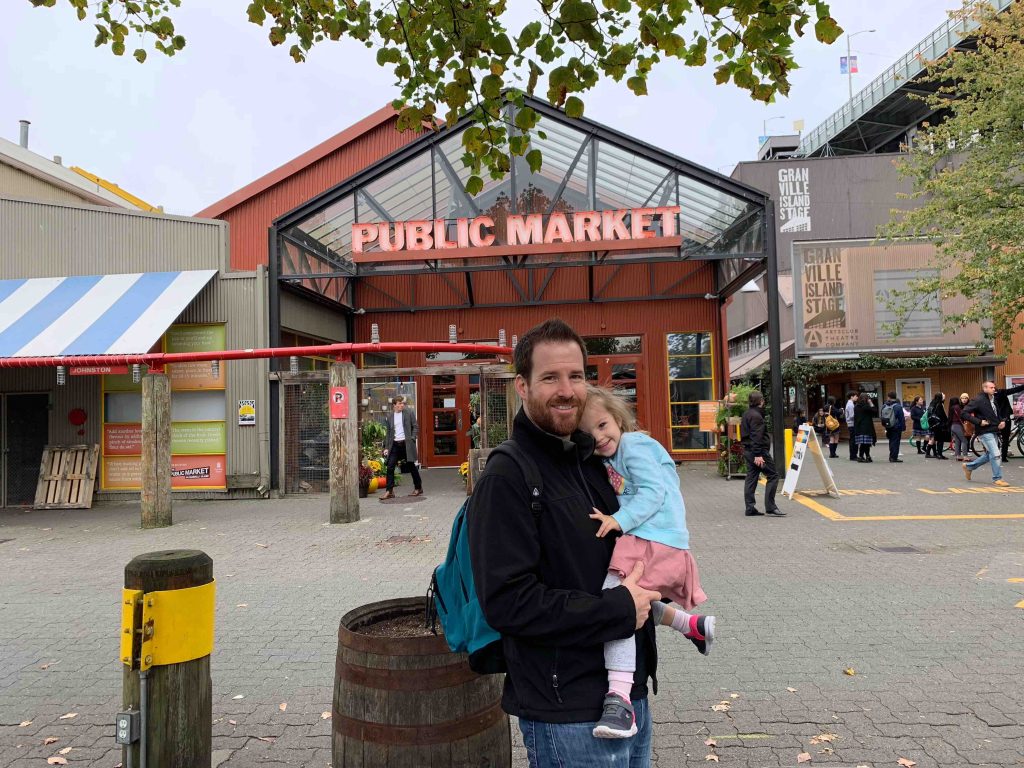 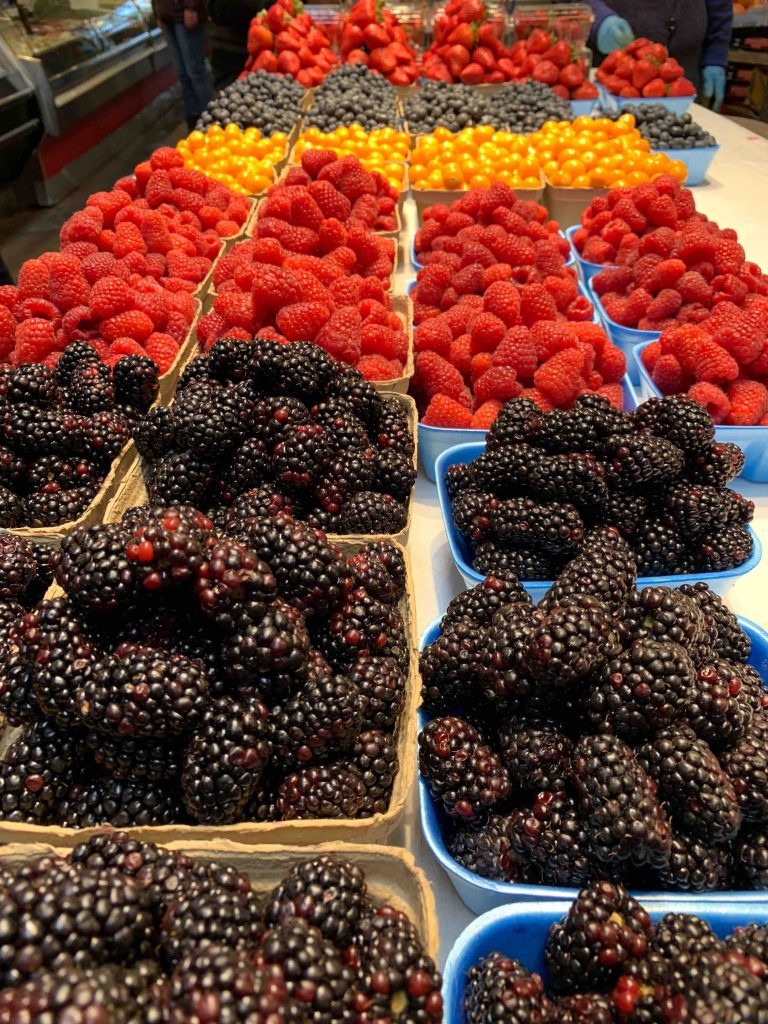 Before coming to Vancouver I came across a book titled, “The 100 Mile Diet.”  In this book, two Vancouverite journalists detail their quest to eat foods only grown within a 100 mile radius of their downtown home.  It is an entertaining read, if you have the time.

The interest in local foods seems to have overtaken Vancouver.  Grocery stores prominently mark and display local foods.  Restaurants advertise available local fare on their sandwich boards and mark local foods on the menu.  This is especially true on Granville Island.  We had the luxury of eating at Edible Canada, which served entirely local eats except for items that do not grow nearby (i.e. lemons and avocados).  I agree that the local foods DO taste fresher.  My avocado toast came topped with pea shoots that were so flavorful it was shocking.  Really?  Pea shoots??  But they were!

For our mini-tourists we hit up Granville Island’s Kid Market.  It was a wonderland of toy shops, arcades, and an indoor playground.  It would be a one-stop-shop for the girl’s Christmas!  However, after three times through every store and what felt like an eternity on the playground, I had to poke myself in the eye to remind myself to blink.  Chris and I finally agreed that they could each buy one packable toy if, for goodness sake, they would just pick it out quickly.  And then, even after everything, we had to leave the Kid’s Market with two weeping Raggedy-Ann dolls whose legs no longer worked.  Thankfully they fell asleep almost immediately and we took the opportunity to get some ice cream.  Ha! 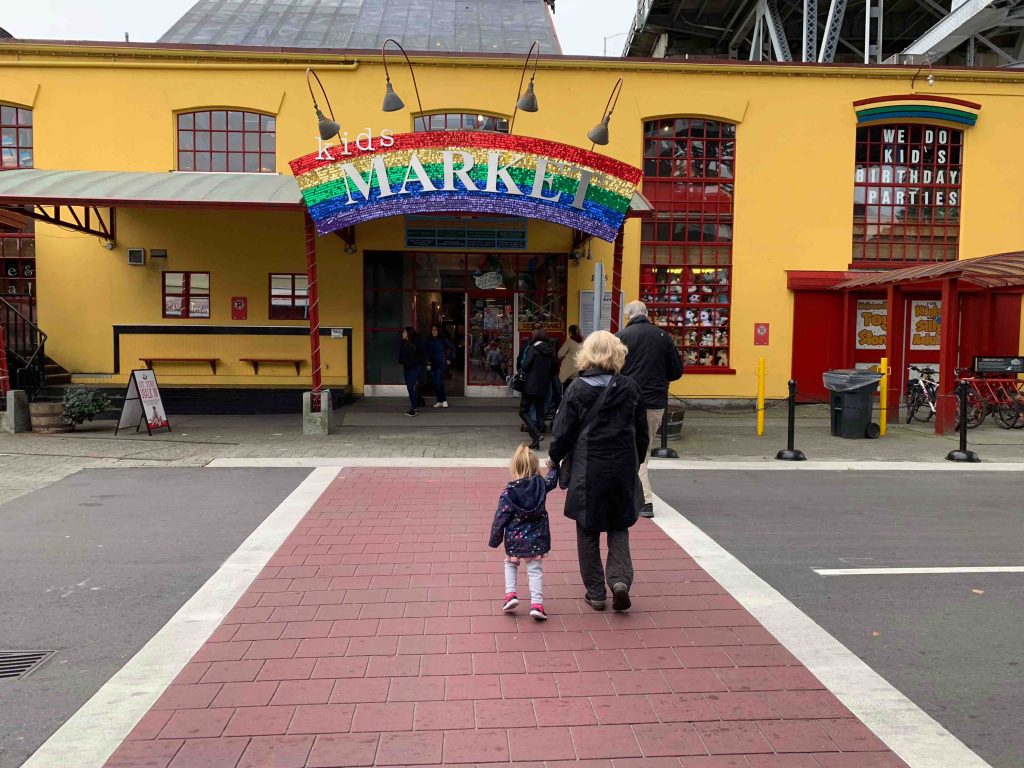 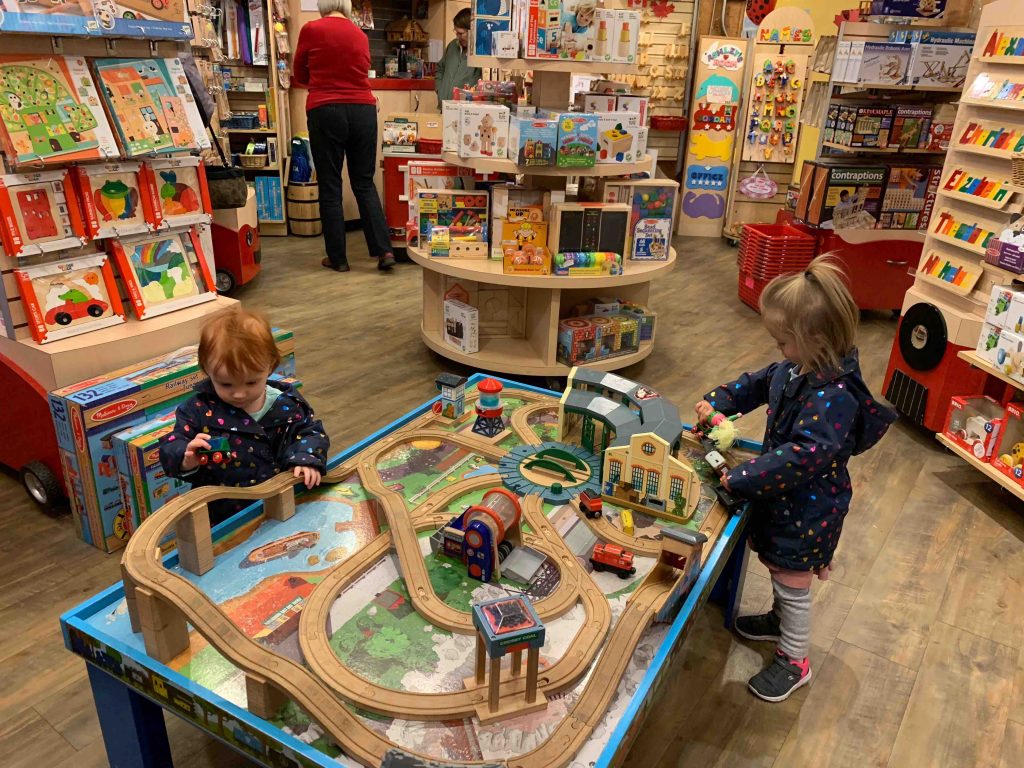 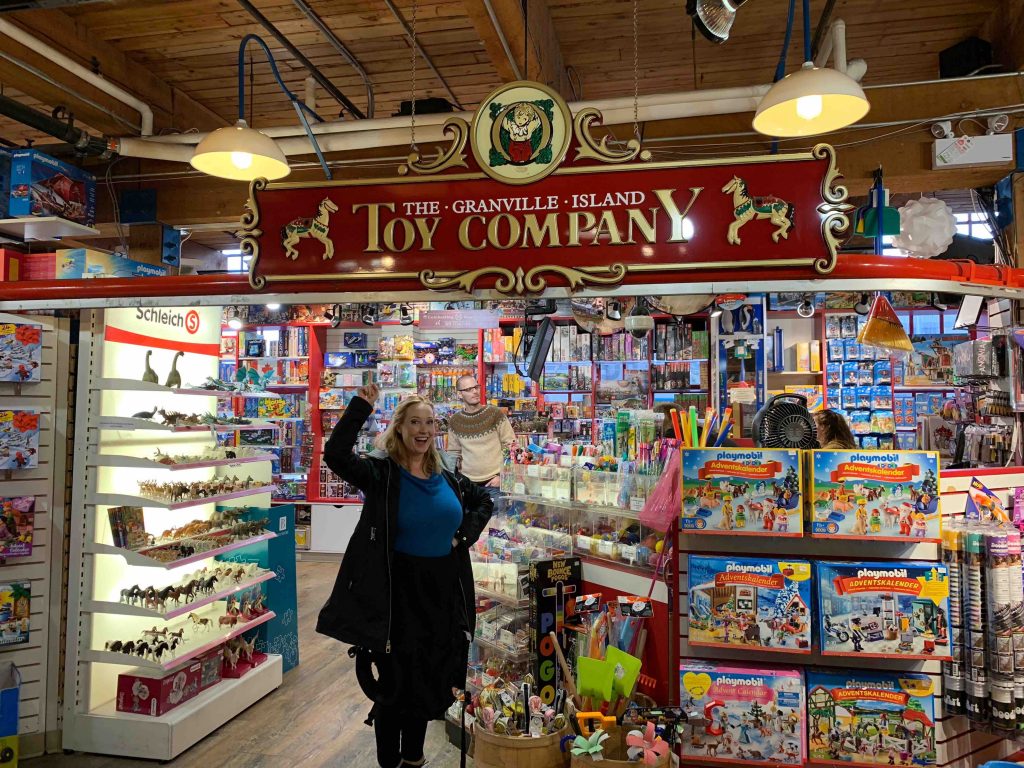 The following day we walked over to an area of Vancouver called Gastown.  This is a historic district now known for its shopping, but, in my opinion it had a few too many souvenir shops.  Vancouver as a whole has a coffee shop on every corner, but I’m fine with that.  Coffee pairs nicely with gloomy weather.  It also goes just fine with summer heat.  And caffeine pairs nicely with parenthood.

In all of our shopping we have noticed, to our surprise, that the shops are willing to accept US dollars.  This means we have not had to exchange any money.  But the shops give change in Canadian dollars, so we have accumulated a little Canadian money.

Canadian bills don’t start until the C$5 note.  This means that the C$1 and C$2 are actually coins called Loonies and Toonies.  Also, the money isn’t even paper anymore!  It’s printed on a durable polymer film, which feels pretty funky (slick), and comes in a rainbow range of colors.  These bills include see-through windows, holograms, raised ink, and metallic elements, which make them harder to counterfeit.  There was a rumor that some money even had a maple syrup scratch and sniff element, but the Bank of Canada refuted that.  The bills are designed to stand up to water in the washing machine, heat in the dryer, and long cold Canadian winters.  Supposedly they are also really hard to rip. Chris and I tried to tear them for a moment (we were not successful), but then we remembered that we have children and we need all the money we can get, so we gently folded the indestructible bills and put them back in our pockets.

Only one more blog entry to go! Our trip is winding down.