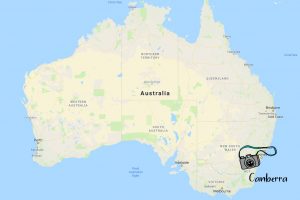 Well we just finished our first week in Australia and have had a few adventures and some educational experience. If you are feeling especially bored, please enjoy this long email.

On Sunday evening (after I sent the previous email), we decided to walk to a nearby lake. This involved trekking through some more rustic areas than around our hotel. While walking we saw some lovely black and white birds. On our way back we saw signs warning us to steer clear of these “swoop birds.” Apparently during the spring when their babies are hatching these birds can become very aggressive and swoop down to attack people and bikers. They may try to peck your head or, if feeling very threatened, land on your chest and try to peck your face! This finally explained why we kept seeing bikers with zip ties sticking up all over their helmets. It’s to ward off swoop birds! Suffice it to say, we will take a different route next time. 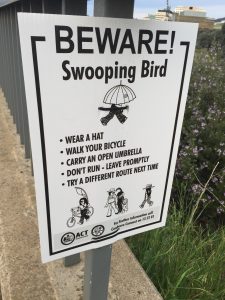 On Monday Chris had the day off and so he was able to escort me out to his job site to see where he works. It’s a lovely drive past rolling hills filled with sheep and emus and kangaroos. Unfortunately I didn’t see any of it because Lizzy fussed for the entire 45-minute drive and I was trying to entertain her. When we arrived we were able to eat at the café and experience the Australian nature. This nature involves a lot of bugs, specifically, enormous flies. We spent our meal frantically swatting around our heads. This is known as the “Australian wave.” When it was time to leave I volunteered to drive home just to escape sitting with Lizzy in the back. It was my first time on the left side of the road, but I did ok. I had been able to watch Chris for a while and figure some things out (although I did turn on the windshield wipers a few times). Our day ended with me trying to cook for the first time in our hotel kitchenette. It was tricky since we have a scant amount of cooking utensils, the oven can only fit one item in it at a time, AND all of the degrees are in Celsius. My cooking skills in the US are spotty and dinnertime frequently involves disabling the smoke alarm, so I was rightfully nervous about this meal. I did eventually get everything cooked and it was edible. Success! Although Chris did say his favorite part was the sauce (that we bought).

Tuesday was uneventful except for a trip to a local art museum for me and Lizzy. Chris and I ate dinner at KFC (branching out, I know) and we both got combos that included drinks. Those drinks were cans of coke. So far I have yet to see a soda fountain and the idea of free refillable sodas is laughable out here. I miss unending soda!

Wednesday was also pretty laid back. Lizzy and I just walked around the local areas. Poor Lizzy has none of her toys from home except for her beloved Sophie teething giraffe. It was just too difficult to pack them. So at the hotel she has been playing with the exotic toys, “colander spoon,” “old coffee lids,” and “empty wipes bag.” She was getting a little tired of them. Fortunately for us one of Chris’ Australian coworkers has a 3-year old and went through her old things and brought us several old toys! Lizzy is in new toy heaven! Oh yea, and we went out tonight to have tea (with real glass cups and saucers) and two older women just had to come over and tell me I had a beautiful “hubs and bubs.” As in, Chris and Lizzy are cute. He was holding her and playing with her at the time. They twice mentioned how cute Chris is. Slutty old ladies.

Thursday was my first day really hanging out with Australians! I went with the women’s walking group from church on their morning walk. I was the youngest person there by at least 20 years, but I didn’t mind. And wow, these women could walk! I had to hustle to keep up! I guess that is what happens in a more pedestrian culture. I think we need a group like this at our church. These women informed me that in Australia, “nursing” means to hold a baby. So someone might say, “can I nurse your baby?” and I shouldn’t stare at them in bewilderment. They simply call nursing, breastfeeding. Also my “stroller” to them is a “buggy” or a “pram.”

On Friday I braved the Australian roads again, keeping to the left, and took Lizzy to the Library for “Giggle and Wiggle”. This is a program put on at each library and is designed for children under 2. They sang songs, read books, and danced. They sang the Itsy Bitsy Spider, but instead they sang the Eensy Weensy Spider. They also sang a song about great Britannia and a hot potato song that I heard in the TV show Arrested Development and never understood until now. Giggle and Wiggle was a great program and there must have been 100 babies there! I wanted to make a friend there, but I also didn’t want to be creepy, so I tried striking up conversations without sounding too desperate. I tricked one girl into talking to me and we exchanged phone numbers. Now to see if she ever calls…. This is what it must feel like to be a guy.

This morning (Saturday) we ate at a local restaurant where I ordered waffles. They were served drenched in caramel sauce and topped with ice cream! Didn’t really seem like a breakfast food, but what do I know? I think donuts are a perfectly acceptable breakfast. This afternoon we were invited to tea with one of Chris’ coworkers. It was nice to be invited into someone’s home and they had two adorable children that kept Lizzy entertained while we ate. Here we learned that they call pacifiers “dummys.” We also learned that Australians say, “How are you going?” rather than “How are you doing?”

And here ends your Australian lesson for the week. Now everyone go eat at Outback and think of us and order lots of refillable soda!

The adventure continues here →  If You See a Crocodile, Don’t Forget to Scream