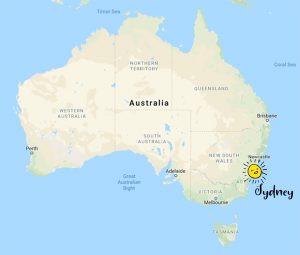 After our last email we only spent a couple of days in Sydney and then headed back to CA. We were sorry to leave, but excited to return in time for Thanksgiving!

On Sunday we loaded our bub into the pram and visited the large Taronga Zoo in Sydney. We had to take a ferry to the zoo and again met very friendly Australians. While I was gas bagging with them they asked how we liked Australians and we replied that they were exceedingly friendly and their response was, “Well we always thought Americans were so friendly when we visited the States.” So it seems that Aussies and Americans just generally get along. Once we arrived at the zoo we found that it was much bigger than the one we visited multiple times in Canberra. However, this zoo was chockers with parents and ankle biters so it was often difficult to see the animals. The zoo is set atop a hill overlooking the entire Sydney Harbour, so the view was one of the best features. After the zoo, I went in search of a pair of ridgy-didge Uggs. You would think that since they are made in Australia they would be cheap as chips, but they were mostly the same prices as back in the USA. But I was able to find one pair and visited a couple of other stores to get prezzies for Chrissie.

On our last day we ditched the pram, packed our bathers, and decided to go walkabout at Bondi Beach. It was a beaut beach and looked much like our California beaches, but the water seemed clearer. We had a relaxing lunch overlooking the water and then walked along a trail at the oceans edge watching the shark biscuits. We did take a moment to put our feet in the water as we had heard the water was warmer in Australia, but it wasn’t warm enough to entice us to get in! On the bus ride home Lizzy was feeling quite cheeky and made friends with everyone around us. That evening, despite being totally knackered, we packed all of our souvenirs and clothes into bursting suitcases and lay down for a restless night.

When we arrived at the airport the following morning we discovered, to our surprise and delight, that we had been upgraded to a basinet seat. This gave us extra leg room and a place to lay Lizzy if she ever fell asleep. However, the first time Chris tried to lay her down she woke up and was as cross as a frog in a sock. But he was able to lay her down later, thankfully, though she only slept a total of 5 hours during the 13 hour flight. To make matters worse, I had been fighting a cold and during the flight became completely crook! I couldn’t do anything but shiver in my seat. Thankfully, Chris was an absolute saviour and he took care of Lizzy basically the entire flight. We made it home safe and sound!

We thoroughly enjoyed our time in Oz and I would love to return again. If anyone asks if Australia is a nice place to live, you can respond, “Too right you are! It’s a bonzer place to live!”

P.S. If you found this post a bit confusing (a.k.a. you’re American), you can find the Australian to American language conversion below the pictures.

Ridgy-Didge = an original or genuine item. Someone who is telling the truth

Cheap as Chips = an excellent price

Beaut = beauty, something great or fantastic

Shark Biscuits = a body board, or a young, inexperienced surfer

Cheeky = boldly rude, but in an endearing or amusing way

Crook = to be sick or something that is poorly made

Crickey = excitement of disbelief, made internationally famous by the late Steve Irwin

Most definitions provided by the book Instant Aussie: Australia in a Nutshell